If you’ve ever participated in an escape room adventure, you probably have an idea of the attention to detail and planning that goes into designing a quality locked room experience!

Creating a (good) escape room puzzle is an art and a science. And while no two escape rooms will be the exact same, there is a unique formula that goes into crafting an immersive escape puzzle.

In this post, we’re exploring a few different types of puzzles that can add some spicy variety to a puzzle room’s play-through.

Some Spice to Make an Escape Room Nice…

We’ll share an industry secret with you: When designing an escape room, the key to crafting a great escape experience is in entertaining your players while getting them to flex their puzzle solving muscles.

While the examples we’re using below are generic, a great escape room will feature all these types of escape puzzles while matching the theme and atmosphere of the room itself.

Tip: Tactile puzzles really should be the bread and butter of your escape room.

This is largely because the greatest draw of a real life escape room (compared to an online escape game, for example) is the ability to explore and interact with the physical space.

Players want to pick up items, use tools, move around and interact with the room. As such, tactile puzzles should be front-and-center. (Bonus points if your puzzle requires the use of two or more players to solve!)

A standard example of a traditional tactile puzzle would be a jigsaw puzzle. 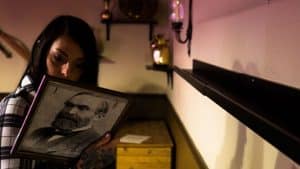 Given a set of defined rules, players are asked to solve a sequence or put items in the correct order.

Logic puzzles are great for “meta puzzles” (ie. puzzles that require solutions from multiple other puzzles to solve). These puzzles are fun, but must be thoroughly tested to ensure the logic holds up and shortcuts cannot be taken with just a few answers!

A classic example would be Einstein’s Five Houses Riddle.

Can be as simple as counting and adding the correct number of items in a room to solving for x in an equation.

Mathematical puzzles are the easiest puzzles to design and the hardest to make enjoyable.

While solving 3 + x = 6 is indeed a puzzle, it is too reminiscent of after school exercises and classes.

Our experience has taught us that the best way to incorporate a math puzzle is to combine it with another type. Requiring players to solve [# of Statues] + [# of Lamps] = Lock Combination forces players to explore the room and interact in a tactile way.

While the final puzzle is mathematical in nature, the players enjoy the experience much more!

This type of puzzle challenges players by putting items out of reach, which requires patience or physical skill.

An example of this would be placing a key out of reach that must be grabbed by a long pole or balancing objects through a maze.

A dexterity puzzle is an off-shoot of tactile puzzles in that players are not only interacting with an object, but must show skill with said object to succeed.

In the example given, reaching a key with a pole is not actually a “puzzle”. However, finding pieces of a pole and then realizing one needs to assemble it to reach the key is.

You’ll want to be careful with dexterity puzzles – you don’t want to allow too much chance of failure on the part of the player! Nothing stops the flow of an escape room more than having the host resetting the puzzle because a key accidentally dropped out of reach!

With a cryptic/translation puzzle, players are given an indecipherable set of symbols with no instructions on how to translate them.

As a result, it is up to the player to find clues and patterns in the symbols to translate or make sense of the puzzle.

Tip: This type of puzzle is good if you want to incorporate backtracking in your rooms.

Having a strange set of symbols at the start and then providing a codex later on allows a designer to extend the “playspace” of their rooms. Cryptic/Translation puzzles are great, but care must be taken to ensure the puzzles are not so cryptic that players do not solve them.

A common type of cryptic puzzle would be a rebus puzzle.

Can be a question or statement with a hidden meaning, often with a nice rhythmic prose.

For example, “A box without hinges, key, or lid, yet golden treasure inside is hid.” Answer: An Egg.

Riddles are amazing puzzles, but you should take care to ensure they are not so difficult that players do not solve them. But with any good escape room, no outside information should be required; the answer to your riddle should be located somewhere in the room to that players can stumble upon it and put two and two together.

This may seem like giving away the answer, but not if the answer is cleverly disguised as part of the decor/theme!

And that’s that! However, we’ll end with one final tip: Remember that puzzles should not be arbitrarily stuck onto a room like a weird appendage. The best rooms have puzzles that are developed from the theme outward, not forced in because “we need a math puzzle to balance things out.”

Now it’s a matter of finding the best balance that works for you… So good luck and happy designing!

Ready to jump into your next escape room adventure? Then contact us or just go ahead and book one of our awesome escape rooms online!